By: Virginia Riddle Environmental “win-wins”, or objectives that have little negative environmental impact, are becoming more and more difficult to come by. An example of an environmental win-win would be the mass fishing of shrimp while avoiding harming other unneeded sea creatures. These situations are often projected to […]

By Virginia Riddle Friday, December 3rd, the U.S. Supreme Court denied the request of Maine lobster fishers to lift fishing restrictions that were set in place to protect North Atlantic right whales. Lobstering groups claimed that the restrictions would limit the abilities of over 100 of the state’s […]

By: Virginia Riddle Jeff Bezos, Amazon’s billionaire founder, pledged during a Glasgow climate summit to put $2 billion towards restoring environmental habitats and food systems. On top of this, he plans to have Amazon power its operations with renewable energy by 2025. This pledge is coming right after […]

The University of Michigan Searches for Cancer Risks in Environment

By: Virginia Riddle The University of Michigan (U-M) was granted $13 million from the National Cancer Institute to track how exposure to environmental contaminants could lead to cancer. The grant will be put into U-M’s School of Public Health and Rogel Cancer Center, specifically to the program of […] 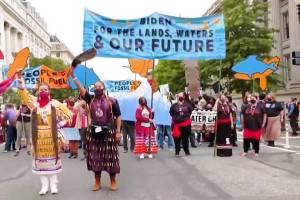 Image Credit: Democracy NowBy Virginia Riddle Washington, DC Oct. 14: Indigenous water protectors started protests against the continued construction of Line 3 through a sit-in at the Interior Department in Washington, D.C. The protests were sparked by the Line 3 pipeline being built through numerous existing Indigenous territories. […]

The Summer of Climate Disasters

By: Samantha Walker Within the last month there have been a magnitude of whether related disasters from all parts of the world. There has been talk of climate change and the threat of the irreparable damage of disregard for the environment, but this past summer has seen an […]

By Bobby Winner This past Thursday, the Thiel community came together to participate in a campus-wide community cleanup day as a part of the NCAA’s Division III Week. The event consisted of many of Thiel’s athletes coming together to make the campus look more beautiful as well as […]